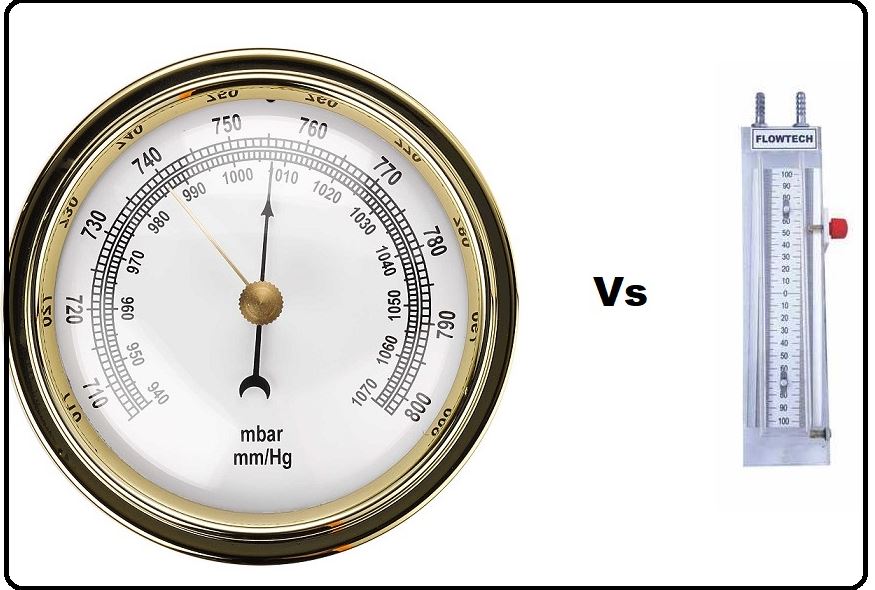 We employ a variety of equipment to measure pressure. Manometers and barometers are devices that measure pressure, although their uses and events differ. For instance, it’s possible that their operating concept is similar. This article will explain what a barometer and a manometer are, as well as how they differ from one another. In this post, we also go into their calculations, work, and applications.

What is a barometer?

The air pressure above or below sea level can be measured using a barometer. Weather patterns created by high and low pressure along with the barometer aid in weather forecasting. Evangelista Torricelli, an Italian physicist, created the first barometer in 1643. He places mercury in a vacuum, examines its attributes, and creates the barometer for the first time in history.

There are two major types of barometers, which are given below:

A brand-new, sophisticated, and digital barometer is the aneroid barometer. It is made up of an aneroid capsule with a metal box constructed of copper and beryllium alloy. This metal box is firmly sealed due to atmospheric pressure because we want the levers and springs to expand and compress more effectively. Additionally, this barometer displays the atmospheric pressure on a digital scale.

What is a manometer?

A piece of equipment called a manometer is used to gauge pipeline pressure. Manometers have been used to measure pressures other than atmospheric pressure. any kind of pressure, including that in steam, liquid, gas, etc. Because of its high density, mercury makes up the majority of the liquid in the U-shaped tube of this instrument, which has both ends accessible to the air.

Differences between manometer and barometer

A manometer is a U-shaped, open-ended tube that is filled with mercury or water and is free from air pressure that presses from both sides. It can measure various gaseous pressures. The mercury level typically moves along the testing pressure with one end linked to any high-pressure, bulb, or gas sealed and the other end open for ambient pressure.

A heavy liquid with a high density is needed in a barometer, depending on its size, thus mercury can fulfill all the instrument’s requirements and clearly display variations in air pressure. No liquid has been required for use in digital or aneroid barometers; just air cells have.

Most manometers employ heavy liquids, but open-ended manometers use lighter liquids like water, oil, benzene, and bromides to prevent poisoning and toxicity that can occasionally cause by mercury.

Height disparities in manometers can be calculated in hectopascals using measurements in millimeters or inches. Which arm of the tube contains more liquid is measured when the manometer’s one end is opened and one high-pressure gas is connected to it. When there is more liquid on the open-end arm, the gas exerts more pressure, which is added to by air pressure. When there is more liquid on the opposite arm, the gas exerts less pressure, and you can measure the pressure of the test gas.

A meteorologist uses a barometer to anticipate the weather, and it has been utilized for weather forecasting. By measuring air pressure, barometers are able to forecast changes in weather patterns.

With the exception of air pressure, a manometer can measure all types of pressure. The blood pressure instrument that doctors use to gauge our body’s BP level is a popular form of manometer and is referred to as a sphygmomanometer.