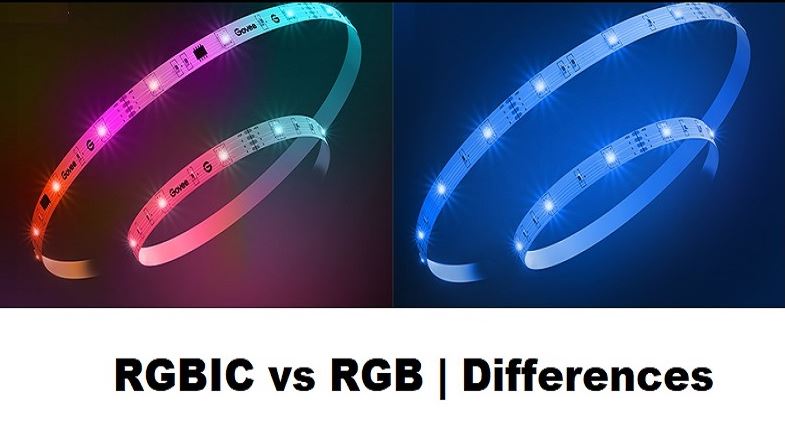 What is RGBIC LED strip light?

RGBIC LED strip light, the latest advanced technology of lightning has independent control (IC) chip that helps in controlling the color of each segment independently. The strips of the LED light have divided into segments and each segment has its LED and one IC. Some segments have three LEDs, these numbers vary depending upon the type of LEDs, and each LED consists of one controller.

What is an RGB LED strip light?

RGB LED strip light is a cheap, simple, and easy-to-use light. You have to adjust it to any surface and then connect to the controller and give a power supply to RGB light so, it starts working. RGB LED light shows three main colors red green and blue with the combination of these colors we can make colors like white, yellow, cyan, and many more colors.

As you know, both LED strip lights, have three main primary colors. Here a question arises, how we could differentiate both of them. Here we will discuss how these two strip lights are different from each other.

As you know both lights have been used to enhance the decoration and lighting of a certain place and none is dull. RGB LED strip light brightness is enough for use because it gives you maximum brightness but in contrast to this RGBIC LED strip light it gives ultra-brightness because of its advanced techniques and creates too much brightness even as a night light.

Who can cut strips?

The RGBIC LED strip light contains an IC chip that makes a complete programmed system and if you cut the strip of that light to place at any other place then it will not function anymore. While on the other hand, RGB LED strip light can be cut and its strip can be placed anywhere you want and create more spaces. On RGB lights, it is already marked that you can cut their strips.

In RGB, the colors that shine in the strip is different and show variation as the combination of three primary colors but the variety of colors are the same in all section of a strip at a time because it does not have any independent control chip.

When to use RGBIC and RGB:

RGB LED strip lights shine in different colors just by the combination of three colors red, blue, and green. Even it produces white color that makes it unique. RGB lights have been used in home appliances like in the kitchen, rooms, and under things for decorating creatively. It uses on signboards, billboards, bars, restaurants, and automobiles like in cars tires.

Mostly, we all know the uses of RGB LED strip light but now we see when to use RGBIC strip light. For its advanced technology, we use these lights in the room if we want more brightness and a lightning effect. RGBIC LED strip lights to have smartphone apps to control the colors of each section of strips making more variety of colors in it.

Everyone wants to enhance the beauty of their houses, restaurants, bars, and automobiles and use many lights for it. For a creative mind, these two lights are enough to enhance the decoration and beauty of the place and things. Therefore, in this article, we discuss these two RGBIC LED strip lights and RGB LED strip lights in all aspects that how they both are different from each other, and where they are both used.